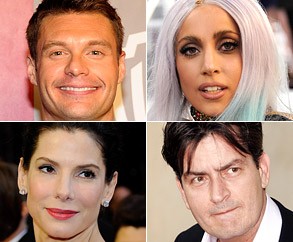 PARADE
It’s no secret that most celebs can’t complain when it comes to their yearly earnings. How much do they actually make? Take a peek inside the paychecks of some of your favorite stars.*
– What People Earn
– What People Earn: TV vs. Reality

$30 million
The ‘Two and a Half Men’ star may have had a few bumps in the road this year, but his bank account is still intact. The actor earned $30 million in 2010. How’s that for winning?

$56 million
Although Bullock has had a tough personal year, the Oscar-winning actress has most definitely come out on top financially, pulling in $56 million from her box office hits.

$27.5 million and $28.5 million
Twilight’s dreamy Robert Pattinson earned $27.5 million, while his co-star and rumored off-screen love Kristen Stewart raked in an impressive $28.5 million. That should make for one memorable date night!

The talk-show host makes audiences laugh daily, but she’s laughing all the way to the bank with $19 million in her pocket.

$51 million and $50 million
A few years ago, would you ever have guessed that Ryan Seacrest would out-earn The Donald? It’s close, but Seacrest brought home $51 million, while Donald Trump earned “just” $50 million.

$87 million and $63 million
Wonder if there’s any salary competition in Beyonce and Jay Z’s house? Beyonce out-earned her hubby last year, with $87 million, while Jay brought home a cool $63 million.