Archive for the ‘Top 10 Most Dangerous Jobs’ Category 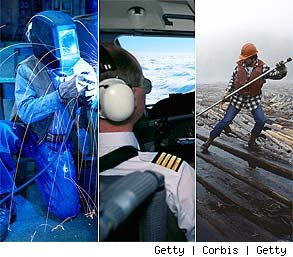 Although not tied directly to his job, the recent death of ‘Deadliest Catch’ star Justin Tennison has brought dangerous jobs to the forefront again.

All jobs comes with health risks, but while some are minor, like computer eye strain or a slipping hazard in the break room by the coffee machine, others are more serious and even potentially even fatal. Falling from great heights, being crushed under heavy equipment, and crashing into a fiery explosion are just a few of the job dangers many workers face daily.

The U.S. Bureau of Labor Statistics compiled data from such hazardous jobs and created this list of The Top Ten Most Dangerous Occupations. Of course there’s an upside to dangerous work, which is that often the added danger translates into higher pay.

Why it’s so dangerous: Hauling and maneuvering nets or cages weighing several hundred pounds (or more) is tricky enough even without heavy rain, wind, slippery decks, and ice cold waves splashing and sloshing everywhere. And of course drowning is always a very real possibility.

Why it’s so dangerous: Loggers work at great heights and on unstable, uneven terrain with chain saws and logging machines that are dangerous even when used properly. They’re also required to negotiate the incredible momentum and massive weight of falling trees and tree limbs, often in inclement weather and in remote locations where proper health care faciltiies are not readily available.

Why it’s so dangerous: Bush flying, crop dusting, banner towing and piloting commercial flights are all included in this group. Crop dusting and bush flying are by far the most dangerous due to the fact that they fly in small planes, very close to the ground, and often work long hours. Also, as with all pilots, if something goes wrong there’s little option other than to come crashing down.

Why it’s so dangerous: Farmers and ranchers face an array of on-the-job hazards including being crushed or entangled by heavy machinery such as combines and balers, kicked or trampled by livestock, trapped inside silos or grain elevators, and exposed to toxic levels of pesticides and other chemicals. All this while working extremely long hours during planting and harvest seasons.

Why it’s so dangerous: Heights, severe inclines, slippery surfaces, uneven footing, a lack of safety harnesses or netting, and tasks that usually require both hands, make falls are a very real possibility for roofers. Add in searing heat, wind, sun, and dehydration, and you have a potentially fatal workplace environment.

Why it’s so dangerous: No matter how coordinated, balanced, and focused you are walking 4-inch wide metal planks, climbing ladders, and dodging falling debris all day at dizzying heights (sometimes dozens or even hundreds of feet above the ground) is risky business.

Why it’s so dangerous: The seemingly mundane job of “garbage man” is a surprisingly hazardous one, in part due to risks associated with operating heavy lifting and compacting equipment, but mostly because of the way they ride from house to house clinging to the sides and back of their garbage trucks. They often perch precariously on narrow ledges and running boards — just one little slip and they can easily be caught under the wheels of the truck and/or hit by passing traffic.

Why it’s so dangerous:Large-scale machinery designed to crush, melt, bend, or reform metal or other industrial materials can easily crush or mangle a human in seconds if something goes wrong. There’s also the risk of fire or explosion, exposure to toxic chemicals, and falling or shifting debris.

Why it’s so dangerous: Driving is hazardous for anyone for any length of time but especially for those that drive for a living. Long hours and boring stretches of road make staying alert and focused a challenge, while high speeds, very large vehicles, and heavy loads make the consequences of even a small error or lapse exponentially more serious.

Why it’s so dangerous: Construction workers labor in all sorts of environments including underground, at great heights, and on busy highways and building sites. In addition they often work with hazardous materials, explosives, heavy equipment, and power tools.