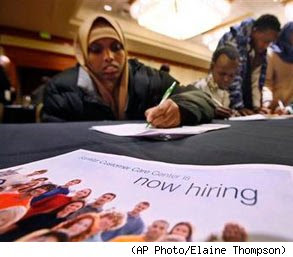 WASHINGTON (AP) – Employers hired in February at the fastest pace in almost a year and the unemployment rate fell to 8.9 percent – a nearly two-year low.
The economy added 192,000 jobs last month, with factories, professional and business services, education and health care among those expanding employment. Retailers, however, trimmed jobs. State and local governments, wrestling with budget shortfalls, slashed 30,000 jobs, the most since November. Federal government hiring was flat.
Private employers added 222,000 jobs last month, the most since April. That shows that companies are feeling more confident in the economy and about their own financial prospects. And it bolstered hopes that businesses will shift into a more aggressively hiring mode and boost the economic recovery.
The unemployment rate is now at the lowest point since April 2009. It has been falling for three months, down from 9.8 percent in November, marking the sharpest three-month decline since 1983.
“These number can be sustained and built on,” economist Joel Naroff at Naroff Economic Advisors. “The economy is recovering, there is no question about it. Businesses are finally taking some of those profits they are earning and putting them back into the work force.”
#mini_module_blank { width: 269px; height: 206px; border: medium none; float: left; margin: 10px; font-size: 12px; }#mini_module_blank img { width: 265px; height: 131px; border: medium none; margin: 0px; }#mini_module_blank .mini_main { margin: 0px; padding: 0px; width: 269px; height: 206px; background: url(“http://www.aolcdn.com/travel/zing-background-no-photo&#8221;) repeat scroll 0% 0% transparent; }#mini_module_blank .mini_item_header { padding: 12px 0px; margin: 0px 20px; font-size: 16px; }#mini_module_blank .mini_item { padding: 8px 0px; margin: 0px 20px; border-bottom: 1px dotted rgb(204, 204, 204); }#mini_module_blank a { color: rgb(73, 163, 202); text-decoration: none; }#mini_module_blank a:hover { color: rgb(249, 132, 25); text-decoration: underline; } The number of unemployed people dipped to 13.7 million, still almost double since before the recession.

When factoring in the number of part-time workers who would rather be working full time and those who have given up looking for work, the percentage of “underemployed” people dropped to 15.9 percent in February. That’s the lowest in nearly two years.

The positive news on the hiring front comes as the larger economy is gaining momentum.

Americans shoppers are spending more. U.S. exporters are selling more abroad. Manufacturing is growing at the fastest pace in nearly seven years. And the service sector, which employs about 90 percent of the work force, is expanding at the fastest clip in more than five years.

The 192,000 jobs added in February was a significant improvement from the 63,000 notched in January. Some of the boost came as people resumed work, after dropping off payrolls because of bad weather in January. Still, the gains were widespread.
Factories added 33,000 jobs. Education and health care added 40,000 positions. Professional and businesses services added 47,000. Leisure and hospitality added 21,000 jobs. Construction companies, 33,000 jobs – although a good chunk of those reflected people coming back on payrolls after January’s harsh winter weather; Transportation and warehousing added 22,000 jobs.

Workers’ paychecks were mostly flat. Average hourly earning rose to $22.87 in February, up only one cent from January. Workers have little bargaining power to demand big pay raises because the weak jobs market.

And rising gasoline prices are putting more pressure on Americans’ pocketbooks. Gasoline is averaging close to $3.50 a gallon nationwide. Higher prices can force consumers to cut back spending on other things. That has the potential to slow the recovery and hiring.